This week's parasha is Korah. It takes it's name from that of Moses' fellow from the tribe of Levi, 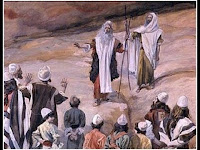 Korah, who attempted to lead a rebellion against Moses. Korah led the rebellion because he believed that Moses and Aaron were claiming to be holier than the rest of the community. Korah believed that all of the people were holy and that they should share in the special relationship with God. In short, he wanted to be a priest as well. At first it might seem like this is the first socialist revolt, the first time when the proletariat tried to wrestle power from the elite leadership of the community. Yet if one looks at the true nature of the revolt one will find that this is not the case.