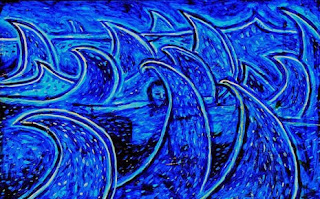 
At first glance this week's parashah, Bemidbar, seems rather tedious. After all, it consists mainly of the names of the heads of all the tribes and how the counting of the first census in the desert took place about a year after the giving of the Ten Commandments on Mount Sinai. However, one name in the census jumped out at me when I was reading through the parashah. That name was Nachshon ben Aminadav, the head of the tribe of Judah. Nachshon is a very famous character in the Midrash even though he is barely mentioned in the Torah.

According to midrash when the Israelites were trapped between the Sea of Reeds and Pharaoh's army, and while Moses was praying to God for help, Nachshon decided to take matters into his own hands and leaped into the sea. Then God said to Moses (my translation) "Stop praying already! Turn around and look at what your friend Nachshon has done. While you stand here praying he is taking some action!" Only then does God part the sea so that the Israelites can cross.